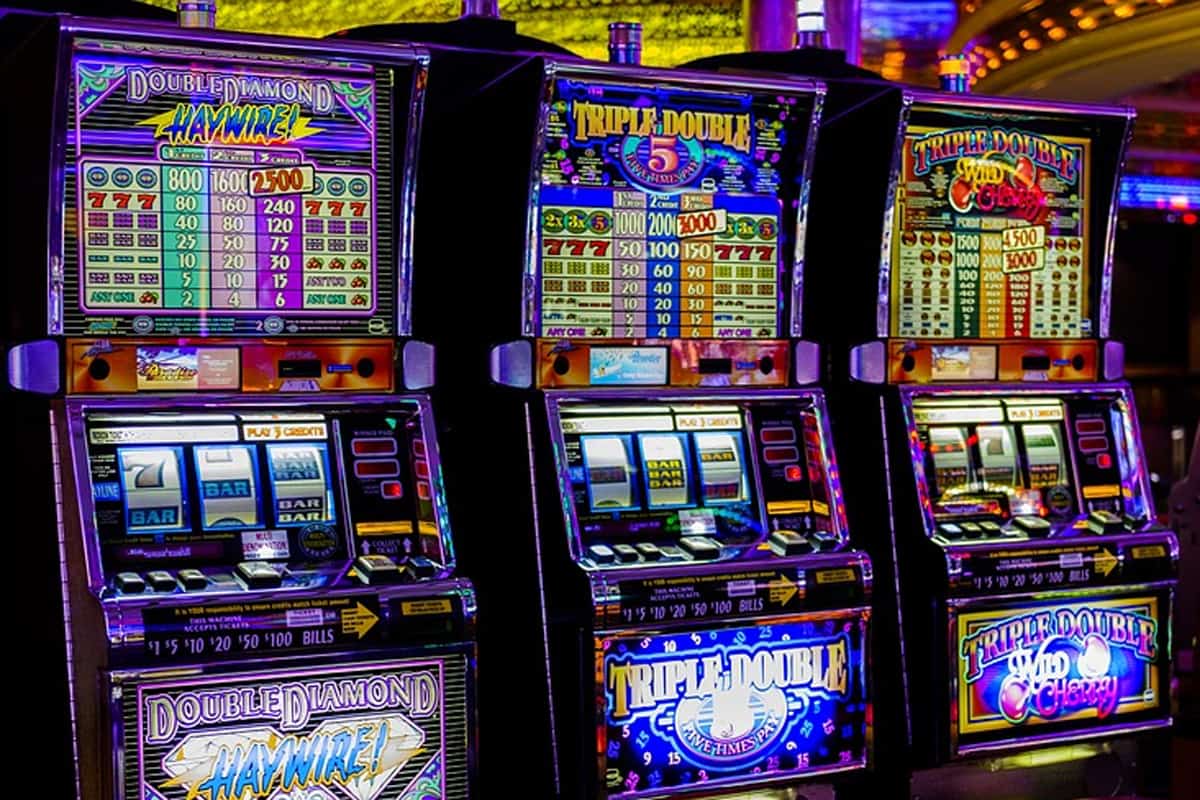 I can remember the first time I went spinning to win on the slot machines like it was yesterday.

As a college kid studying at Arizona State University, my twenty-first birthday bash took a few pals and me to Sin City for a weekend of debauchery.

But while my fraternity brothers were staying busy ogling the wares over at the Spearmint Rhino strip club or chasing skirts poolside at the Tropicana, I found myself pulled toward the slot parlor like a moth drawn to the flames.

Flames probably come to mind there because I crashed and burned. I was just a dumb kid, and I definitely didn’t know about details like return to player (RTP) percentages and probabilities at the time.

No, I was more interested in the flashing meter overhead which displayed the Megabucks progressive jackpot.

And why not? At $12 million and change, that was the most money I’ve ever encountered in real life. Just knowing I had a chance — however remote that chance might be — to take home every penny of that enormous jackpot had me itching to take a shot.

Little did I know, the actual odds of winning the top prize on a Megabucks machine stand at 1 in 49,836,032. And even if I did know that, lightning has to strike sometime, right?

Struck by the sense of hope only the young can still harbor, I set out to beat the odds and bring home the bacon.

Soon enough, however, the $3 per spin required to compete for the progressive jackpot put me down for the count. It all happened so fast. $500 in hard-earned dough saved all summer just for the trip, and I’m not sure I even managed a basic winner on a single spin.

Just like that, my birthday festivities were finished, and I was forced to head home in defeat. My buddies never let me live that one down, either — not until I finally won the Megabucks jackpot, that is.

From Loser to Winner, and It Feels So Good

I’d like to tell you I came home from that disastrous Las Vegas trip and became a model citizen, but in reality, I turned into a compulsive gambler.

To make matters worse, I was hooked on the slots, only one of the worst games on the casino floor when it comes to giving players a fighting chance. While the smart souls were across the way grinding blackjack against a house edge of only 0.50%, I was stuck looking for a miracle against house edges of 13% and higher.

Suffice it to say, I was that proverbial sucker whose contributions helped to construct every glittering casino resort along the Strip.

After dropping untold thousands on my slot machine addiction, not to mention a great girlfriend and my own sense of self-respect, my luck finally changed like a thunderbolt from above.

Like I said, lightning has to strike somebody, somewhere, sometime… and on this particular morning, it struck me.

I don’t like revealing the details of my Megabucks jackpot — to preserve personal privacy and protect myself from the worst elements in the world — but my score can be found among the eight-figure payouts listed below.

Those numbers are extraordinary to consider in full, even years after I watched one of them materialize in my bank account like magic.

When the fateful spin went down, I almost didn’t even notice the perfect arrangement of three “MEGABUCKS” symbols lined up directly alongside one another.

After all, I’d put in thousands and thousands of spins before that, and like millions of other Megabucks hopefuls before me, I’d never once witnessed that exact symbol alignment. Remember, it’s an almost 1 in 50 million shot to do so, which means a player could spin every day for the rest of their life and never have it happen.

That’s why it took the flashing lights and sirens to zap me out of my slot spinning slumber. But when I heard all the commotion and suddenly realized what was happening, I was wide awake like never before.

That surge of adrenaline I felt was like something out of a dream, and in the moment, I honestly did think I was dreaming. But I never did wake up, and over the next few hours, a long lineup of paperwork and casino red tape brought me back to my senses.

Once I was home, however, it was time to party like I’d never partied before. It’s been a long while since my college days, so this party was more about calling my parents to celebrate their newly paid mortgage, telling my wife to call and quit her job, and explaining to the kids why we’d be moving into a new house sometime soon.

Yep, that’s my kind of party…

Here’s the thing about slot machine jackpots, though — they’re not all they’re cracked up to be.

Instead of receiving the entire eight-figure payout all at once, Megabucks rules and Nevada Gaming Control Board (NGCB) regulations mandate a 25-year annuity installment plan.

In that case, those installments came to right around $900,000 per year, a princely sum which put me on Easy Street for the foreseeable future.

But by virtue of “earning” in the high six figures on an annual basis, I was bumped into the highest tax bracket. That means 47% of my yearly installment payout went straight to the Internal Revenue Service (IRS).

All told, I’m still getting paid like a pricey high-powered corporate lawyer, all while I sit around and fix up my 1969 Chevy Corvette dream car in the newly built garage.

Listen, I can’t complain for a second about this situation; I’m simply letting you know how these jackpot winners really play out. Everybody who knows about my big win naturally assumes I’ve got millions of dollars in the bank, but that’s just not the case at all. Between settling outstanding debts, making a few choice upgrades, and investing prudently, I’m happy to have a hundred thousand or so per year left over on the side.

Like I said, I’m not complaining, but that’s chump change when your newfound cousins and close friends all think you’re Richie Rich.

The Come-Down Is Cold and Brutal

The other aspect of winning a slot machine jackpot that most gamblers don’t anticipate is the mental letdown that occurs afterward.

Folks who are addicted to drugs or alcohol often reference the “come-down,” or the unique effects on brain chemistry that occur when somebody stops using substances cold turkey. After your brain receives a steady dose of dopamine infusions — which, not coincidentally, slot machines produce in spades — cutting that supply off can be disastrous.

It was for me, anyway…

After the big win, I couldn’t really justify heading back to the casino to continue my slot machine addiction. The whole chase was centered around finally winning a life-changing amount of money, and at long last, I made it happen.

So just like that, I quit gambling altogether, and let me be the first to tell you… the straight life sucks. I loved playing the slots, and to be honest, I probably loved the chase more than I do the end result.

That’s pretty sick, I know, but it’s the truth. And the truth is, there are many days where I’d rather be back at the casino having fun than sitting in a bank cashing checks.

Every slot machine specialist dreams about hitting it big one day and riding off into the sunset, but in my case, it just wasn’t that simple. Between my long battle with compulsive gambling, a newly flush bankroll that seemed infinite and inexhaustible, and the come-down effect that follows any life-changing experience, I almost wish I’d never crossed paths with that Megabucks machine.

My life is obviously much improved by virtue of winning the jackpot, and with a family to worry about, I wouldn’t trade that financial security for anything. Even so, I can’t help but wonder if finally finding the pot at the end of the rainbow was really worth all the trouble it took to get there.

Read about the secrets of a slot machine player that won a big jackpot. How did he do it and how did his life change?

Established in 2018, PowerPlay managed to become the favorite of 1000's of Canucks in just a short time. The bookie’s ease of use and an excellent list of sports markets have made it a big hit in Canada.

Play nowPlay now
18+. Terms & conditions apply
1. This offer is available to all PowerPlay customers on their first two sports bets.
2. To qualify for the free bets customers must place two sports bets of at least $5 each on any single or multiple markets. The odds for each of the two bets should be 3.0/+200 or greater.
3. Each of the first two bets will be matched up to $50. To claim the full $100 free bet place 2x $50 bets. (same amount for all currencies)
4. The Free Bet will be issued up to 36 hours after these bets have been settled.
5. The Free Bet can be used on any sports bet, single or multiple. Only winnings are paid.
6. You cannot back both sides of the same bet
7. The Free Bet(s) are valid for 7 days after being awarded.
8. This promotion, as with all promotions, are part of the overall terms and conditions of the site.