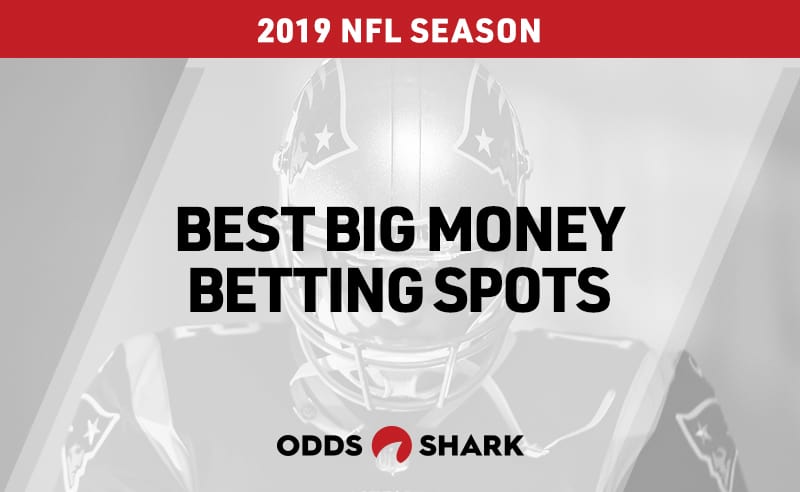 The NFL is regarded as one of the most difficult sports leagues in the world to handicap and with good reason. Each week, there’s numerous examples of bets that look like absolute locks, but for whatever reason, they fall flat and suck money out bettor’s bankrolls in the process.

Early in my career covering the sports betting landscape, it became incredibly clear that there’s no such thing as a lock — especially when it comes to the NFL. If you dig deep enough, however, there’s a handful of spots in the NFL that have been extremely reliable over the years.

Thankfully, I have access to decades worth of data and uncovered some extremely profitable betting situations that can hopefully give us a bit of head start in the 2019 NFL season.

Will some of them fall flat? Yes. Will some be sustained? Absolutely. Will the betting nerds of the internet say this article is worthless because trends offer no predictive value? Now that right there is a lock!

Whether you buy into trends or not, these are spots that continue to pay out, so let’s dive in and explore if there’s logic to back these up:

The Bet: The Super Bowl Loser in Week 1

Call it a Super Bowl hangover if you’d like, but this awful record for Super Bowl losers in Week 1 of the following season is likely the result of them simply being overvalued based on their previous year’s result. There’s a lot of turnover in the NFL from season-to-season and many early season spreads are taking last year's data into account.

When you can bet it: In Week 1 of this season… or to be more specific, you can fade the Rams who are at -3 in Carolina.

The Bet: The Seahawks in Night Games

Almost the entirety of this amazing run in primetime has been on Pete Carroll’s watch while Russell Wilson has been under center for a large chunk of these games. We can’t properly measure motivation, but it’s entirely possible that these are the type of games that the longtime head coach/QB combo “get up” for. The fact that the Seahawks have been one of the most consistent teams during this decade also helps.

As for Wilson “getting up”  for playing under the bright lights in primetime, consider that his career QB rating at night is 7.3 points higher than his typically late-afternoon starts. He also has a better completion percentage, a better touchdown-to-interception ratio, and most importantly, a better win percentage (81.4% vs 65%) at night vs the late afternoon.

Here’s a breakdown of Seattle in night games in a few specific situations:

The Bet: Patriots in Buffalo

What an embarrassment for Bills Mafia. Some might argue that this trend doesn’t matter because it extends to well before the Brady-Belichick era, but it’s actually a better number if you shrink it down to start in 2000 when Belichick became the Patriots’ head coach, as they’ve gone 14-4-1 ATS in this span.

So, what gives? Is this simply due to the Patriots’ historic domination of the league and the Bills’ constant turnover at head coach and QB making them one of the league’s most elite dumpster fires? Mostly, yes.

Specific the Belichick-era, the Patriots have a ridiculous 12 double-digit victories in Buffalo, but they’ve only been a double-digit favorite in three of the 19 games. They’ve been routinely undervalued and their league-best 60.8% ATS covering percentage over the last 10 years is proof of that. But, here’s the thing, they have a winning ATS record across dozens of different spots, which is nuts considering they’re the most elite dynasty in football history.

It was actually a challenge to choose just one situation in this article to highlight New England. Check out the other hot spots for the Patriots at the bottom of the article.

This was an especially big money maker during the 2018 season when the home team went 10-3-2 ATS on Thursday nights. I think it’s incredibly obvious why the home team has such an advantage on Thursday nights, as the road team is traveling on a short week, putting them in an uncomfortable position with less time to prepare while recovering from the previous week in a hotel.

Extending this trend even further, the home team went 71-53-6 ATS (57.3%) on TNF over the last 10 years, so this has a long history of being a profitable spot. When in doubt on Thursday nights, take the home team.

When to bet it: I shouldn't have to tell you this

The Bet: Cowboys UNDERs on the Road

At first look, this seems more coincidental than anything, but Dallas has performed much differently offensively on the road the past four seasons. In three of the four years, there’s a pretty big disparity in their home/away scoring averages:

We also have a similar pattern on defense with the team performing much better on that side of the ball outside of Dallas in three of the last four seasons:

Is the transition from the turf at Jerry’s World to other playing surfaces the difference maker here? It seems to be an obvious reason, but maybe their offensive preparation for road games isn’t on par with their prep for home games.

Either way, keep an eye on their road totals during the season. Every matchup is different, but if their O/U number for road games is on par with their averages in home games, I’d strongly lean towards this trend continuing.

It’s no coincidence that this record coincides with the first season of Andy Reid’s tenure as head coach of the Chiefs. He has a reputation as an incredible game planner and good coaches tend to know teams within their division quite well.

The interesting thing about these games is that the three ATS loses all came vs the Raiders, while KC is a perfect 11-0 ATS in their last 11 games in Denver and San Diego/Los Angeles.

One concern this season is that this is the best Chiefs team coming into a season in the Andy Reid-era, so they could face higher than normal spreads, at least early in the season.

The Bet: Favorites on Thanksgiving

Short on time or recovering from a Black Friday fistfight at WalMart and no time to handicap the NFL Thanksgiving games? Just take the favorites then and you’re likely to walk away with a profit. Including the past two seasons when the favorite covered the spread in all six games, faves are on an absolute tear on Thanksgiving at 31-11 ATS since 2005. And this trend isn’t just restricted to the 2000s as favorites covering on Thanksgiving is a long-standing tradition as they’ve gone 53-29 ATS (64.5%) since 1984.

You’d think home teams would have a significant edge here, as laid out in the TNF trend above, but home teams were favored in just over half of the games since 2005, and only went 18-23 ATS.

Also, these games are synonymous with ass-kickings, similar to the ones we see at WalMart on Black Friday, as 32 of 51 games since 2000 were decided by double-digits.

This season’s Thanksgiving games feature the Bears in Detroit, the Cowboys hosting the Bills and the Saints visiting Atlanta.

Some teams are slow starters and need a few weeks to get going and the Saints are at the top of the list of early-season underperformers.

In 2018, we saw them choke in Week 1 and lose to the Bucs as a 10-point favorite at home. The following week, in another home game, they barely snuck by the Hugh Jackson and Tyrod Taylor-led Browns, winning by three as a 9.5-point favorite. They then went on to cover the spread in nine straight games after the rough start.

The bottom line is that Sean Peyton has done a poor job at getting off to a good start and Drew Brees also hasn’t been sharp early in seasons, proven by his career September QB rating of 94.7 which is his lowest of any month.

When to bet it: With the Saints favored by a touchdown in Week 1 on MNF vs the Texans, and a Week 2 rematch of last season’s NFC Title game where bettors are sure to play-up the revenge angle, these could be prime spots to once again fade New Orleans in early season games.

The Bet: Steelers as a double-digit favorite

Pittsburgh has been playing down to weaker competition for almost two decades and has been especially bad in this spot recently, going 0-5 ATS as a favorite of 10 or more points since the start of the 2017 season. Most notably, they’ve been atrocious as a double-digit road favorite in this span, going 1-10 ATS.

Mike Tomlin took over as Steelers head coach in 2007 so most of this inefficiency as a big favorite is on his watch. They’ve still been an outright winner in most of these games, going 22-5 under Tomlin, but they clearly underestimate weaker opponents, making them a fantastic fade as a big favorite.

The Bet: Florida Teams on the road in December and January

So, besides generally sucking over the past decade, another thing these teams have in common is playing in a very distinct climate. It’s probably the most obvious thing to handicap, with warm weather teams playing outside of their comfort zones in the colder weather months, but it appears as if oddsmakers aren’t accounting enough for it.

Miami is the most extreme case out of the three Florida teams in this spot due to playing in a division with the teams that are strongly affected by winter conditions. Going all the way back to 1992, they’re just 3-10 ATS in New England in December and January games. Since 1990, they’re 4-9-1 ATS in Buffalo in these months, while they’ve managed to go 4-3 ATS at the Jets since 1996.

There’s a little bit of grey area here because I didn’t look at weather conditions for each of the teams in these games, but warm-weather city teams who play outside are generally an awful bet when playing in cold weather.

Since 2014, there has been 82 games played in cold temperatures below 32°F (0° C). Nineteen of these games involved warm-weather city teams who play outside (Jacksonville, Miami, LA Chargers, LA Rams, Tampa Bay, Oakland and San Francisco) and they went 6-13 ATS.

Here's another chunk of reliable betting spots over the years :

For more info like this each week during the NFL season, follow me on Twitter. Good luck this season, and as always, KEEP CHASING THAT PAPER!