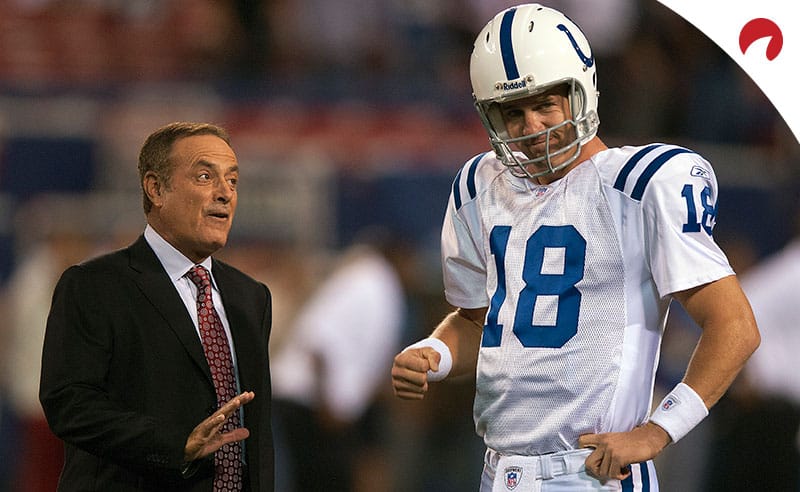 ESPN’s Monday Night Football is the cream of the crop when it comes to NFL broadcasts, but it’s no secret the primetime show is badly in need of a shake-up.

Since Jon Gruden left the broadcast booth in favor of the Oakland Raiders after the 2017 season, MNF has felt stale. Joe Tessitore has done an admirable job as the play-by-play man, but Jason Witten’s lone one-year stint with ESPN left a lot to be desired.

Booger McFarland, who took over for Witten as the primary color commentator after the tight end decided to return to the Dallas Cowboys, was widely disliked by viewers in the 2019 campaign.

Will ESPN Be Able to Land Michaels & Manning?

Now, according to reports, the network is plotting to replace them with a pair of massive names: Al Michaels and Peyton Manning. For the occasion, Bovada has released odds on it happening, with the NO set as the -220 favorite and YES as the +155 underdog.

The New York Post’s Andrew Marchand reported that ESPN is planning to attempt to acquire Michaels from NBC’s Sunday Night Football. Considering Michaels is under contract for two more years, it would require ESPN to make a trade for the veteran sportscaster.

Michaels Has Been Traded Before

It wouldn’t be the first time Michaels was traded in his media career. In 2006 when Michaels wanted to move from ESPN to NBC, Disney, which owns ESPN, traded him in exchange for the rights to Oswald the Lucky Rabbit, the precursor to Mickey Mouse. Yes, that is a real thing that happened.

While Michaels would be a nice addition to MNF, getting Manning would be a much bigger score for ESPN. According to Front Office Sports’ Michael McCarthy, ESPN is preparing to offer the former quarterback between $18 to $20 million to join MNF as its lead analyst. That contract would make him the highest paid television analyst in the NFL, eclipsing Tony Romo’s recent $17 million a year deal with CBS.

Outside of a litany of commercials throughout his playing and post career, Manning doesn’t have any experience in front of a camera. That didn’t matter for Romo, however, as the former Dallas Cowboy QB has flourished as the face of CBS’s NFL broadcasts.

If ESPN can secure Manning and Michaels, it would serve as a significant boost to a product that badly needs a reboot. That would be bad news for Tessitore and McFarland, though the duo would likely remain in Bristol in some capacity. Only time will tell if ESPN can pull it off, but if you think they’ll be able to do it, jump on the YES odds while you can.

For more football betting information, head over to our NFL page.

Odds as of March 7 at Bovada