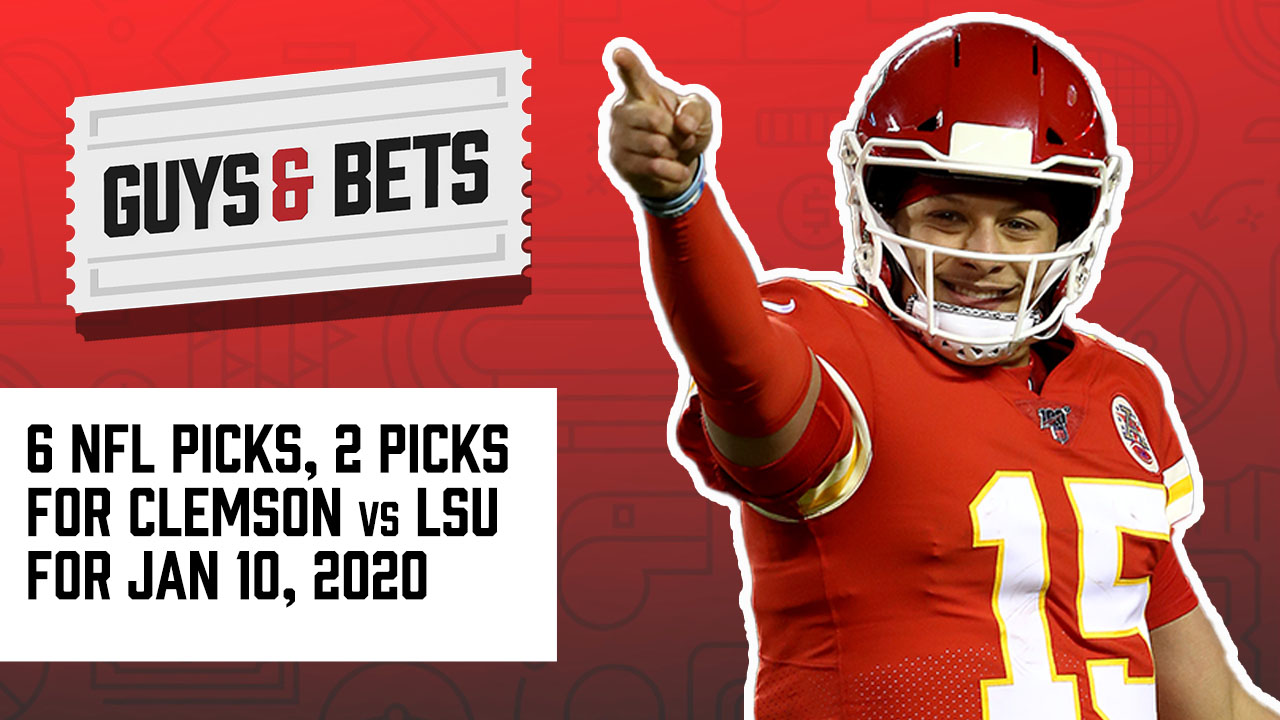 Join Joe Osborne, Andrew Avery, Pamela Maldonado and Harry Gagnon on this week’s Football Friday episode as they break down eight picks across the NFL divisional round and the college football national championship game between the LSU Tigers and Clemson Tigers.

Joe starts the show off with a bet in Saturday’s NFC game between the San Francisco 49ers and Minnesota Vikings. The Niners come into this game with a tough defense but one that had to deal with numerous injuries all season. Their in-game counterpart, the Vikings offense, had to deal with injuries to some key players coming down the stretch. Joe is in on a prop bet for this game.

Next up for Joe is a 6-point teaser. One of the teams has an impeccable record on teasers this season and the other is one of the toughest outs in football.

For Joe’s third and final pick on Football Friday, he’s going to Arrowhead Stadium for a game featuring Deshaun Watson and Patrick Mahomes, two of the best young quarterbacks in the game. While the Houston Texans had to fight and claw for a win against a scrappy Buffalo Bills team, the Kansas City Chiefs enjoyed their bye week. For all the talk the Ravens offense received this year, let’s not sleep on just how potent Mahomes and company can be. The bet in this game is on the spread.

Ninja kicks off his picks with a look at the total for the Tennessee Titans and Baltimore Ravens game. We all know the damage Lamar Jackson did this season leading an explosive and innovative Ravens attack, but don’t sell the Titans short. They really took off when Ryan Tannehill took over under center and now he’s in the second round of the playoffs for the first time in his career.

After hitting both of his player props last weekend, Ninja is on one again. The Seattle Seahawks are at Lambeau Field to square off with the Green Bay Packers. Aaron Jones has been one of the more consistent running backs in the NFL this season and he is the subject of Ninja’s prop bet.

Pamela Maldonado has been capping college football games all season, so it’s no surprise she has dug through the numbers and come up with a play for the national championship game. In a game that features two explosive offenses, Pam likes a bet on the total. Heisman Trophy winner Joe Burrow leads a potent LSU attack that posted 87 offensive touchdowns (tied for the most in the country with Ohio State) and led the NCAA in yards per game (564.2) against Trevor Lawrence, who is undefeated as the starter for Clemson. The Clemson offense is no slouch, having the third-most offensive touchdowns (82) and third-most yards per game (538.4).

Harry Gagnon has two picks today and he gets started by using the best college football betting sites. Harry has been backing the Clemson Tigers for the last few weeks and maybe he’ll do the same today.

Harry also has a bet for the NFL game in the Bay. Coming off a bye week as the top seed in the NFC, the 49ers host the Vikings, who are fresh off their upset win over the New Orleans Saints. There are numerous reasons to go with either side in this one. Can the Vikings focus off an emotional victory? Is Jimmy Garoppolo ready to lead the 49ers? Harry sees one of these teams as vulnerable.